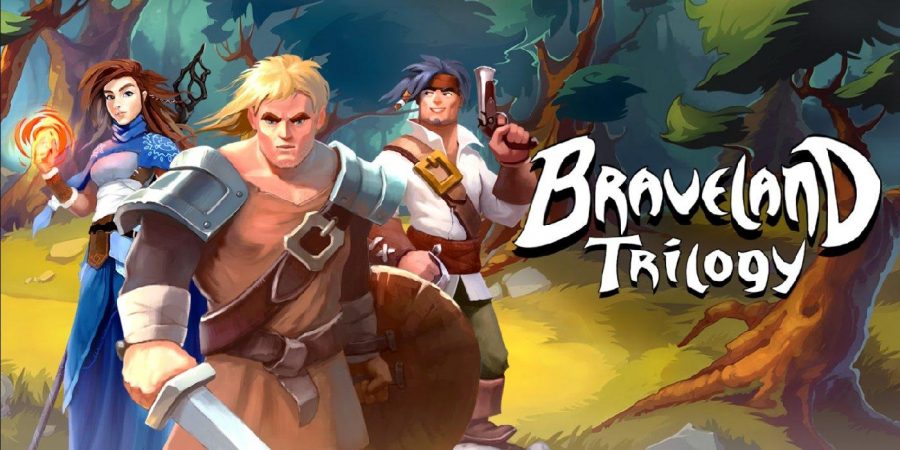 Braveland Trilogy, as one might guess from the game’s title, is actually a trio of games from developer studio Tortuga Team. Though originally released separately between 2014 and 2015 it is now possible to play the games all in one place. With three separate stories to follow, Braveland Trilogy allows you to take the shoes of a warrior, a wizard and a pirate as you traverse through this turn-based strategy adventure game and build up your army. This review will be based on the Nintendo Switch version of the game, though it is also available on Steam.

Right out of the gate Braveland Trilogy gives you the option to play as either the Warrior, the Wizard, or the Pirate, each of whom have their own respective game and adventure to play through, and, though you can play them in any order they do recommend you play them in the above-mentioned order as each of them introduces mechanics that will likely come into play in the later games. Each adventure sees you starting with nothing, as most adventures do, and as you progress across the map you will gain access to an array of new gear, abilities, and troops, with the latter being the obvious focus.

Now, turn-based tileboard strategy games have been around for ages and, at its core, Braveland Trilogy plays very much how you would expect this kind of game to, but it does have some nice means of micromanagement that help boost engagement. Completing battles and unlocking new points on the map grants you access to new kinds of fighters with different abilities and fighting styles, and playing around with different party layouts was, by far, one of the most enjoyable parts of the game. The first hour of each adventure grows a little tedious as each encounter tends to go exactly the same, but after a little while of playing and with more options at hand it becomes easier to distract yourself from the repetitive nature of combat.

The game does provide a bit in the way of character progression as well. The main protagonist of each game is able to don gear and level up, which gives them subtle passive abilities, but I found that these features often took a back seat. They might grant you some extra ranged damage or an extra tile of movement but nothing that would really change the tide of the battle. Occasionally you may even learn a new ability to use in combat as well, but more often than not I would forget I even had them. Even so, these little extra features helped to make the experience feel just that much more like a traditional RPG experience.

Where Braveland Trilogy really stands out in my mind was in its art style. Its highly stylized and cartoony, hand-drawn aesthetic seemed a bit out of place at first, but after a time you do find that there is a certain charm to it. While it doesn’t hurt the core gameplay, it does encourage a much more casual gaming experience. It is more along the lines of something you would expect to see in a mobile or flash game, but it does actually feel right at home on the Switch in its portable mode.

The game’s art style is likely best showcased while traversing the overworld map. Movement is unfortunately linear as you can only move between predetermined points on the map, but there are plenty enough vibrant and exciting locales that you will certainly want to take every detour you need to and visit every point on the map to see what treasures, physical or otherwise, might lay in store.

Narratively the game does not do a whole lot of innovating. You end up following some pretty generic protagonists on some pretty generic quests, aside from the pirate, who had a little bit of extra flair. There is technically an overarching storyline, but it is really difficult to remember what that is until they remind you by blatantly reminding you via in-game text. With every encounter essentially acting as its own little side objective – corny dialogue and all – it is too easy to forget what your goal was aside from slaying all the bandits and mages standing between you and the next treasure chest.

Overall, playing through Braveland Trilogy is an enjoyable experience. Throughout its roughly ten hours’ worth of gameplay it does tend to get to get repetitive at times and it doesn’t redefine the turn-based strategy genre, but it doesn’t need to. The best way to describe it is as a very comfortable gaming experience. It is not too hard or too challenging to turn a more casual gamer away, but it has enough going on to keep all but possibly the hardest core strategy gamers playing. It is absolutely a casual gaming experience, but it is definitely one of the better experiences I have had with a game of this type.