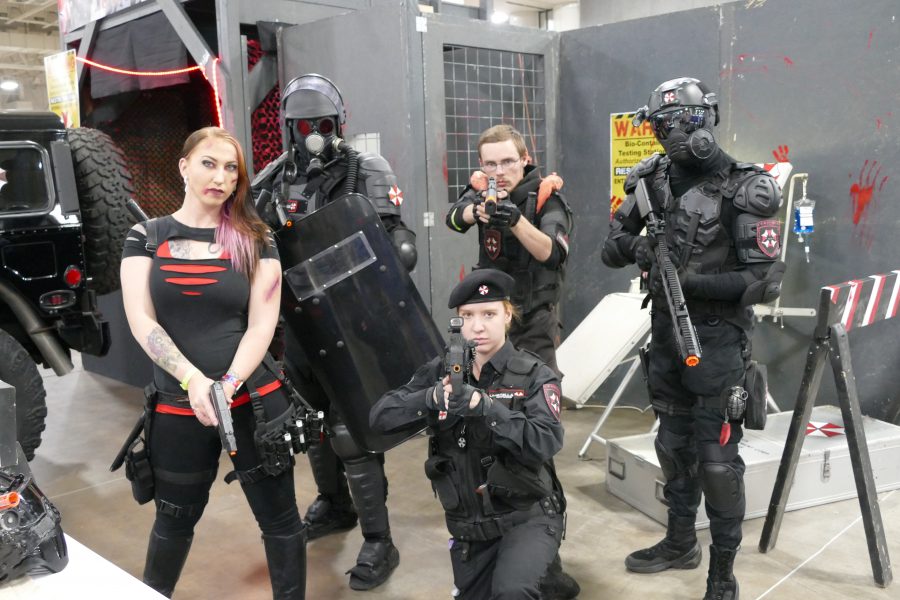 Conventions overall — notably Comic Con, or locally known as FanX, — have a focus and / or draw for cosplay. For those who are unsure what cosplay is, it defines any person who dresses up in a character from a movie, show, book or game). Cosplay characters leans toward those from Anime, Video Games and the Marvel / DC Universe.

Salt Lake Gaming Con (SLGC) is more known for its attractors in gaming such as video games, tabletop, board games, virtual reality, and so on. Cosplay may not be what people expect when they think of attending SLGC, however, you’ll find more than your fair share. Each day will bring a different crowd and different costumes to see. It seems that cosplay is becoming a norm at almost any convention (con). SLGC, like other cons, hosts a cosplay contest for those who hand-make or alter their cosplays by at least 70-percent.

Some people go all out.

It’s amazing to see the work that cosplayers put in. Some of the cosplayers spent months or even longer in order to make something they can be proud of. While others are more creative or prefer something more simple. Emelee Page did an astounding job bringing an original character created in collaboration between artist, Pascal Blanche, and Sculptor(s), House of Gog. The character made, a Moonstone Demon Hunter, made a big impact walking around and informing others of what materials were used in making her cosplay including couch cushions, Worbla moldable plastic, and EVA foam. Page won second place for her Moonstone recreation in the cosplay contest.

Other original characters re-imagined are Ruthless and the Bubak from an original comic book created by a local artist(s) at Velleity Studios. Ainsley from Pigtails and Power Tools aids in giving life to the main character in “Ruthless.” I was able to read the first few editions of it. I’ve never been to a con with so original, or rather unknown, characters being cosplayed. Another cosplayer chose a character from a local Indie studio’s board game, Middara: Unintentional Malum. I was unable to find them however.

Although SLGC is targeted on games, cosplayers at this event treat is more like a typical FanX while some focus on game related character such as “Zelda: Breath of the Wild,” “The Sims,” and “Borderlands.” Rose Creeper does a great version of a “Borderlands” enemy character along with gender bender (opposite of a character’s gender) Sub Zero from the “Mortal Kombat” series.

Hard to Catch Them All

Many of the cosplays with good recognition came from animes, movies and internet shows such as “Red vs. Blue” by Rooster Teeth, Jessie from Team Rocket on “Pokemon,” and The Prowler from “Spiderman: Into the Spiderverse.” There was even a Penny Parker and her mech from “Spiderman: Into the Spiderverse” walking around, though I missed them as well. There are so many cosplays to see that it’s hard to catch them all. SLGC continues to add more content to enjoy and partake in; as well as the change up of the con floor layout had made it a challenge to look and find others.

While not all cosplays are unique or exact replicas, it’s still a joy to admire the work and love that people put in just to show it off. Cosplay isn’t about perfection or looking like the characters being portrayed, it’s all about having fun. I cannot wait until next year to see what cosplayers bring in.

Cosplay photos from the event are shown below.