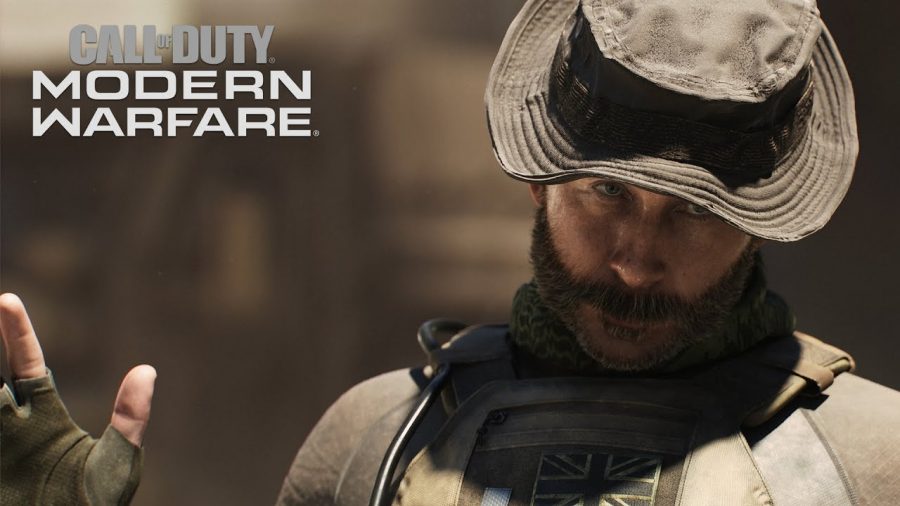 Abstract
Call of Duty Modern Warfare is easily one of the best CODs of recent years. The campaign is intense, gripping, and most importantly- different. Modern Warfare steps away from its traditional COD background by avoiding the ‘epic’ moments of war that previous installments present. Missions from previous CODs like The Only Easy Day… Was Yesterday, or The Gulag present epic moments where everyone is an enemy, and senseless violence is a means to an end. In these installments, it is common for the good guy to find the villain and beat them by the hair on their chin while walking away from an explosion. Modern Warfare steps away from this formula. Instead, it focuses on the ambiguity of who is an enemy, and rewards players who respect human life and sentimentalism. As a disclaimer, this article may have spoilers for Call of Duty: Modern Warfare.

Who is an enemy?
Clean House 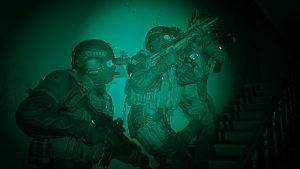 One of the notable features of Modern Warfare’s campaign is in its constant questioning of who the true enemy is. This earned the game a lot of controversy, specifically in the baby scene in the mission Clean House. In this mission the player enters a house, going room to room clearing the house and deleting hostiles. However, this is complicated with civilians either hiding in the house or being held hostage. Although the game does not initially punish players for accidentally killing a hostage or civilian, because they are split second decisions, there is one exception: the notorious baby scene. This occurs when you enter a room and a mother rushes to her baby, hushing it while it cries. The comforting does nothing to quite the baby, and a soldier says “Shut the kid up”. So while the game gives the player no prompt to shoot the child or hurt it, a player may freely shoot the baby. If the player chooses to shoot the child, the game then gives the player a prompt which says: “Children are non-combatants”. After the prompt, the game sends you back to the beginning of the mission. The game then gives the player two more attempts to complete the mission without shooting the child before it kicks the player back to the title screen. This is a literal intervention of the developers, telling players that their actions that have led them here are wrong. By removing the player from the mission, and putting them in ‘time out,’ the game is punishing unethical players. This puts a clear marker that although it is unclear who is an enemy, people or children that can not defend themselves are not enemies. However the game constantly blurs these lines.
Apparel
Most of the enemies the player faces throughout the game are dressed in civilian apparel; T-shirts, jeans, etc. This complicates the missions because shooting civilians prompt the player with a warning. On missions like Piccadilly, it is almost impossible to distinguish the difference between friend and foe. The main identifier becomes the gun that is already shooting at you. This blurring of enemy and victim adds depth to some of the thematic elements that Modern Warfare pushes. Most notably, the complexity of real-world modern warfare. The inability to clearly distinguish enemy from background shows that anybody could be an enemy, even if they are standing right in front of you. This also emphasizes the change in warfare. Instead of governments with uniformed soldiers fighting uniformed soldiers- war has become uniformed soldiers fighting terrorist cells. No longer is war a clean, decisive battle, but a collective of unpredictable guerrilla warfare.
Point of View
One of the most brilliant ways that Modern Warfare poses the question of ‘who is an enemy’ is by its fluid changing of perspectives – switching between characters Alex, Karim, and Kyle. By having the perspectives change from these different operators and ethnicity, it shows that the term ‘enemy’ is more complicated than originally thought. A clear example of this are the complex views of Karim’s group, who declare themselves as freedom fighters, while the Russians declare them terrorists. This complicates the term ‘enemy’ because Kyle takes on a personal motive to fight terrorists, but works alongside Karim. Whereas Karim sees the Russians as terrorists, which is further explored through her flashback mission Hometown. This mission showcases the horrors of war and the lack of protection of civilians in the middle east. This mission can be difficult to digest due to it’s grounded realism (based on Karim’s actual real world experiences). So, being able to clearly identify an enemy in Modern Warfare is difficult, scary, and punishing. 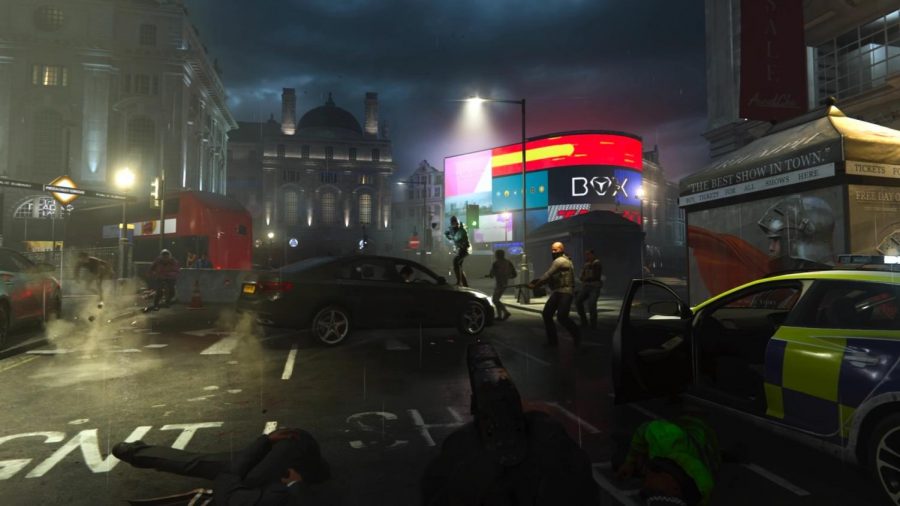 This is seen through the campaign’s actual plot. The plot focuses on a rather simple question: “Who stole the gas?” First, the Americans blame the Russians, the Russians blame Kamir, and so on. Within this game of hot potato, it seems that whoever holds this dangerous weapon becomes labeled as the terrorist or potential terrorist. So, due to the constant changing of perspectives, you may at one moment be the good guy fighting the terrorist, or the terrorist fighting the good guy. The game makes it almost impossible to distinguish.

Rewarding the Humanist Player
Punishment
One can not know reward without the threat of punishment. Missions like Clean House explore this punishment. By booting the player to the title screen, the game puts the player in a ‘time out’ setting. In addition to this, warnings appear when a player shoots a civilian (even by accident). This shows that regardless of your intent, a human life was lost due to the player’s inability to act correctly. So, rather than having a bunch of super soldiers that can shoot everything and everyone like previous COD campaigns, the game punishes players who have this mindset. Mindless shooting provides warnings that destroy the immersion with non-diegetic text. This then pushes players to be more humanistic in their gameplay, rewarding semitism and calm decision making.
Hadir’s Sniper Rifle 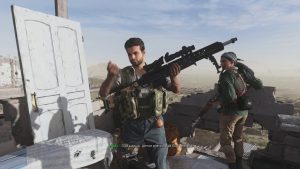 Hadir’s sniper rifle is a great example of how the game rewards the player’s sentiments with other characters. In the mission Highway of Death, Hadir entrusts you with his sniper rifle. One that he personally built and was a lot of fun to play with. This rifle tears through metal, and is used to disable armored vehicles. While the campaign moves on, you end up keeping this rifle. This trust that Hadir gives the player imbues the rifle with a sense of sentimentality, if the epic mission does not do it already. This sentiment is rewarded during the last mission: Into The Furnace. In this mission, the player starts off with Hadir’s sniper and a gun called the M4A1. The beginning of the mission begins with some long range engagements, however, the player has a laser designator to eliminate enemies at range with explosions. This renders the sniper mostly inadequate with the heated combat.

So, if a player decides to switch out this essentially useless rifle for one of the more practical weapons on the ground it would make sense. The only thing that really limits the player is the sentiment that the rifle holds. This sentiment is further challenged when the player enters the compound, facing even more intense close range combat. This makes the sniper more of dead weight than anything else. However, it is in the middle of this close quarter firefight where Hadir’s sniper finds it’s most use in the game- fighting the juggernaut boss that appears at the end of a seeming dungeon of enemies.

Instead of having to scramble to find something to fight this juggernaut with, the sniper rifle takes only a few shots to lay the boss out. Otherwise, the player has to use all of their ammo (in both guns mind you), grenades, and knife to have a chance to kill him. The close quarter area actually helps utilize the sniper rifle because it decreases the risk of getting trapped. Rather than trying to put multiple bullets into the juggernaut, you only need to put in one and then rotate. Whereas players without the sniper find themselves at constant risk trying to stock up on ammo and grenades in the armory, where they are easily cornered. So, while it may not be inherently expressed, the game rewards the players that value sentimentality over functionality. While this is a temporary punishment, its reward is worth the scrapes and bruises along the way. This is only one of the more indirect ways that the game rewards humanist players, though there are certainly more to be found throughout the campaign.

Conclusion
This Call of Duty doesn’t stray away from epic moments by exchanging it with humanism ideals. The epic juggernaut boss fight and Karim’s revenge story are clear examples that stay true to Call of Duty’s epic legacy. It does also boast a pretty cool ending, with Karim literally walking away from a huge explosion. Instead, it adds more depth and realism to the game, showing how it is applicable to true modern warfare. Modern Warfare adds to this depth by making the player constantly question who the enemy is, and by rewarding the player’s more ‘human’ side.

By applying these ideals to the campaign, Modern Warfare takes a step away from its traditional epic formula, and, instead, crafts something that is more grounded in realism and the brutal unpleasantries of war. Morally challenging moments in the campaign, like torture, suicide, and insights into 3rd world countries reveal that current practices in war are often unethical, but necessary (to beat the game, at least). These constant ethical choices highlight the difference between war in the traditional sense and its more contemporary meaning. This idea is further emphasized by the focus on guerrilla warfare and the difference between freedom fighters and terrorists. The plot which tries to constantly pin someone as the bad guy reveals that nobody is the villain, but nobody a the hero either. So, while the campaign steps away from the 2 dimensional formula that we’ve come to love, Modern Warfare’s attempt to add a more humanist aspect of war paint a more 3 dimensional masterpiece.