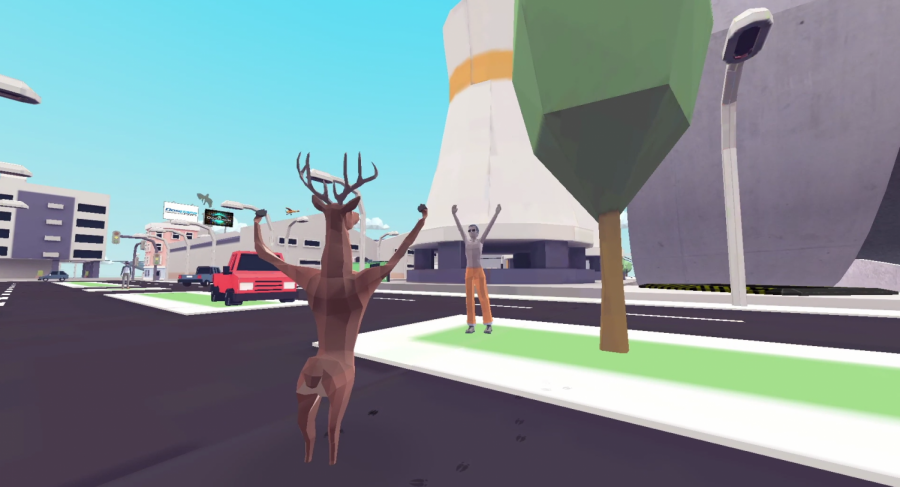 Warning: This review may have possible spoilers for the game, “DEEEER Simulator: Your Average Everyday Deer Game.”

As exhausting as the title of this indie game is, you’re only hitting the tip of the game iceberg. You may or may not get exhausted from the fun and the weirdness this game brings. How much you want to get involved in the game is up to you since “DEEEER Simulator: Your Average Everyday Deer Game” is a casual, action simulator that leaves you to your own devices.

Aesthetics
The aesthetics come off as if you’re playing a version of “Goat Simulator,” but there’s more to this simulator that sets it in its own category. The world has a whimsical appeal and similar art style to that of “Katamari Damacy” with no real objectives. The simple art style yields little distraction to the overwhelming things you can do. And non-player characters range from normal humans and horses to a giant cow and flying elephants.

You start off as a regular-looking deer who wakes up in a grassy patch on the outskirts of a small city on an island. Though, you’ll soon learn during and after the tutorial that this deer isn’t your average everyday deer — if you weren’t convinced by the title screen. You can run, jump, extend your neck, drive, dance and build an army of deer people.

Gameplay
Freedom of choice was the goal the developers, NASPAPA GAMES, have set out for “DEEEER Simulator: Your Average Everyday Deer Game.” This is a trend that has been making its way through the game industry from games like “The Legend of Zelda: Breath of the Wild” to “Death Stranding.” However, there are more freedoms in participation since there isn’t necessarily a story. As the developers put it:

“Put simply, DEEEER Simulator is a “Slow-Life Town Destruction Game”. You can spend your days enjoying a nice, relaxed frolic here and there together with the other animals around town, or you can choose to relieve some stress and absolutely destroy the town and everything in it.”

You can play the game either with mouse and keyboard or a controller. Depending on which feels more comfortable is the player’s choice. This is mentioned since this sort of game might feel easier to play if it were a console import than your average PC game. Though, it’s not unbearable to get used to.

Depending on the quickness of your actions, it can get overwhelming if you aren’t able to keep up with everything going on, as well as the reactions to things around you. If you run around on your hind legs, you can easily go through a wall or have your deer body go flying when hit by a car. Not to mention, when stopping after running around with a group of Naruto-running deerified people, they can end up destroying everything around you. Depending on what you’re wanting to accomplish when stopping can either help take out the baton-wielding sheep police or destroy a building you weren’t wanting to access.

So far, this game was more than what I could’ve expected going in. There’s a wide variety of things to do and find, including figuring out ways to reach certain heights or take out enemies. I’ve played the game by myself and with friends and we seem to find something new with each play. My curiosity was overly peaked as I tried to not just understand what the heck is going on, but what can I accomplish or destroy next. I cannot say how much I’ve enjoyed this game so far.

“DEEEER Simulator: Your Average Everyday Deer Game” has been in early access since Jan 20th of this year. Early access means there are some areas that are still in work. Though, what you purchase during this stage will include full access once it is released as finished. The price is normally $12.99, but there is a short sale for 20-percent off at this moment.