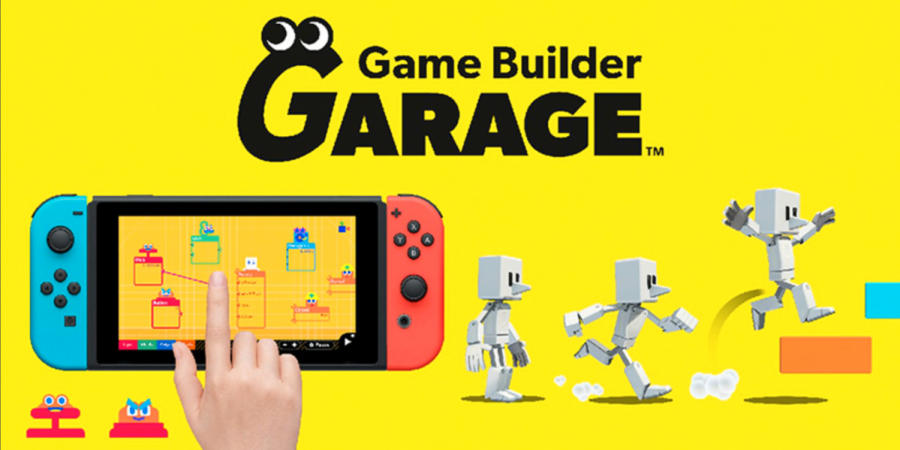 Game Garage Builder is an educational game developed by Nintendo that teaches players how to program video games. Its visual style makes it easy for people of all ages and skills to pick up. However, if you’re seeking to be able to code a video game after playing, you still have a lot to learn. Game Garage Builder does an excellent job at explaining coding concepts like how AND /OR work or how timers on objects function. It’s missing actual coding languages, which makes a lot of difference. Comparing what I learned in my computer science classes with Game Garage Builder, made the educational game seem empty.

What Game Garage Builder does great at is tackling many different types of games, with each one rising in coding difficulty. Through interactive lessons, you are taught how to build seven different types of games: Tag, a tilt-motion roller, a blaster, a side-scroller, a puzzle game, a racer, and a 3D platformer. You make small parts of the final game through a series of steps. Checkpoints that function as mini-quizzes appear after every lesson to test your knowledge on the new material.

Making up every aspect of Game Garage Builder are programming tools called Nodons. The four colors of nodons are the following: Red nodons that deal with player input, green nodons that deal with logic problems and mathematics, blue nodons that deal with outputs, and orange nodons that deal with physical game objects. Every nodon has distinct and unique personalities that allude to their function. They also have multiple basic nodes on them that can be manually connected to each other through lines. This is how you make the code function. More advanced options are available through their settings. As you come across a new nodon, a deep-dive walkthrough is added to Alice’s Guide, a tab with refresher courses on things you’ve learned in each lesson and information on all the nodons, allowing you to learn more about their functionality.

If you’d like to test your recently-learned skills, GGB’s Free Programming is the place to go. Experiment with every nodon in the game, whether or not you’ve encountered them in the lessons, to create a game in your style. You can share your creations online with a Nintendo Switch Online membership and/or locally with its generated Game ID. It gives you the self-satisfaction of publishing a product you’ve poured your heart into.

The Key to Coding

Even though Game Garage Builder has simplified coding with its easy-to-visualize gameplay, you still need to know how to actually code. There’s a variety of coding languages to learn with the most popular being Python and JavaScript. Python is easy for beginners to pick up and is used a lot in academic programming like in financial services. JavaScript is used for web development and making the pages attractive to viewers. Other languages would be Ruby, C++, and C# to name a few with the latter two being used for game development. Still unsure about what language to use or you want to know more? Codecademy gives some helpful information here and more to help you on your journey.

The best way to master the coding language you chose is to start using it. During your learning, you’ll come across Integrated Development Environments (IDEs) and Application Programming Interfaces (APIs). IDEs are the most commonly used by programmers as they function as a code editor, code builder, and debugger. It’s really helpful to have all of these in one program. Most, if not all, game engines will have an IDE integrated into them. They may not look the same, but they’re there. APIs are great for app and webpage creation. It makes it easy to see your progress in real-time as it can be connected to many electronic devices. You can even use an IDE on them through Microsoft Visual Studios. This all may sound confusing, but once you start coding, you’ll see how helpful each of these platforms are for making games and other projects.

There is so much you with coding language knowledge. You can make websites, program robotics and software, create video games, and more! A new technical world is open to you that is expanding day-by-day. For me, the two computer science classes I took have provided me with the understanding to help engineers in my Games classes. I can’t do anything too complicated, but I can quickly pick up what they teach me and take over easy-but-tedious tasks so they can work on more difficult code like AI. It increases the rate that our video game projects are completed. With only having a semester or two time limit, this extra time is very valuable.

Final Thoughts
Game Garage Builder is a fun and entertaining game despite its lack of actual coding languages. You’ll enjoy how complex the game can become as you advance through the lessons. However, it’s important to recognize that you won’t be absolutely comfortable with coding after playing the game. It’s not designed that way. It’s more of a stepping stone to get you familiar with coding concepts and how different parts work together. If you’re serious about learning coding languages, C# (Unity/VS) and C++ are the places to start. In fact, Game Garage Builder’s visual coding concepts mixed with actual practice in the coding language are the best combination if you’re interested in making a video game as they are both important in their own ways.