TLDR: Another great game for you and your roommates at home. 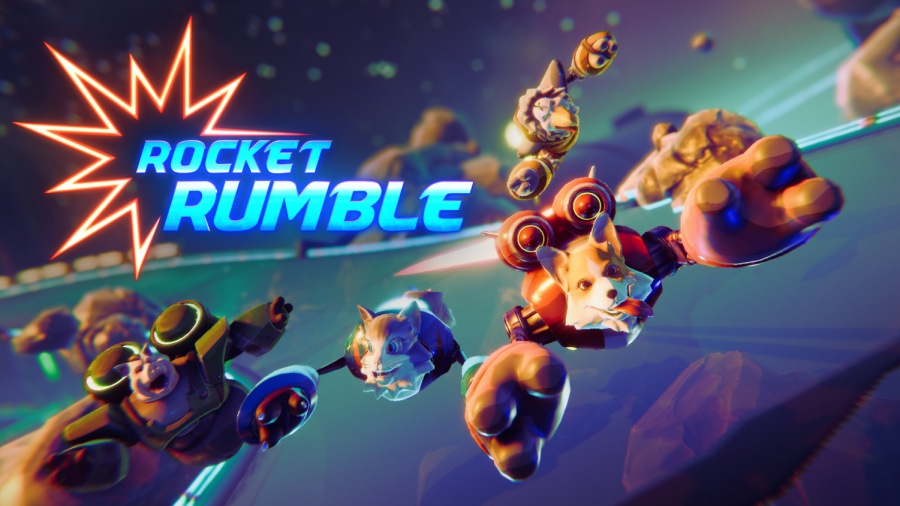 PixelNAUTS’ Rocket Rumble falls into the same category of games as the game Speedrunners. It’s a 2-4 player competitive “racing game” with cute animals in power suits. The objective is to score the most points during the race. Points are scored by hitting your opponent with power-ups or just ramming into them, being the first to reach a checkpoint and the first to reach the finish line. While flying through the level, there are power-ups you can pick up (ala Mario Kart) giving you weapons to use against your opponents.  Currently, it is in early access so there are only 4 characters to choose from and only 3 maps but we had fun for 2 hours still! And they have more characters and customization to come!

I am a sucker for sci-fi and cute animals, AND THIS HAS BOTH!!!
I am also a sucker for character customization and this game has hats, armor color, and different breeds of animals. I can just about replicate my dog and cat in the game and play as their avatars! I’ll probably be able to when they add new breeds into the game too.
The gameplay was fun and non-repetitive. I still need to play this with a full squad of 4 people, but math dictates 4 people should be twice as fun as just 2 people right?

CONS
Well I’ll get obvious out of the way, it’s still a bit janky and some things still don’t work but that’s what it means to play a game in early access, it’s not finished. On a different note,  the design of the game confuses me a little.

Smashing together the mechanics of a racing game and a brawler sounds like a great idea and I still think it can work, right now it feels a little flat. The full release of the game could fix this though.
The respawn mechanic deserves a second look. Throughout the game, your character can “die” and you have to wait for your opponents to reach another checkpoint to respawn. The distance between checkpoints isn’t consistent though, so there are points where I’m left waiting and not playing the game.
Then there’s the fixed camera. With it stuck on the player in the lead, it leans a lot more into the brawler-on-rails game rather than a racing game. I would personally have the camera either always be going and the players don’t have to hold down a button to go or have each player have a camera follow them individually.

Rocket Rumble is a  fun game and a unique idea that I enjoyed playing. AND with a price point of only $10 (in early access), it’s 100% picking up for you and your competitive friends to play sitting on the couch or online. Pick up your copy from Steam NOW!